From a Luthier‘s Notes:
“About sorbus Domestica”
Sebastian Stenzel, Mai 2021

When I mention this tree, the usual reaction is „what? I never heard of that!“. Indeed most people have not, even though its wood was once one of the most highly coveted and sought-after ones in Europe. Sorbus domestica, in German „Speierling“, in English „sorb tree“ or „whitty pear“, in French „cormier“, has the highest density of all larger trees growing in Europe, about 0.88 g/cm3, similar to the heavier rosewoods like Brazilian rosewood (dalbergia nigra) or cocobolo (dalbergia retusa). And in fact, I find the acoustical properties of sorb tree indistinguishable from those of cocobolo, which some guitar makers consider the best of all tonewoods for back and sides of the guitar. Sorb tree wood is very beautiful, especially when it shows „flame“, it has excellent tonal properties and it is very good to work with and polish. Well seasoned, it is not prone to cracks, even when exposed to extreme humidity changes, which makes it one of the best woods for bagpipe pipes, oboes and similar wind instruments. Before prices for steel plunged in the late nineteenth century, it was used for many tools, because it has the greatest wear-resistance of all European woods.

Some years ago, I visited a very old, but still working windmill in the Vendeé in France, near the Atlantic coast. On its main, huge wooden cogwheel hung a dry branch of sorb tree, which I could recognise from its leaves. With bad French/English (and bad English/French, respectively), I learned from the guide, who was very happy to meet someone who actually knew that tree, that sorb tree was used for the cogs of all the cog wheels of the mill. He also told me that in the old times, sorb trees lined the fields and creeks, because farmers and craftsmen needed it for any kind of tool. Those days are long gone.

In the last decades, the sorb tree‘s scarcity was its greatest impediment. This has two main reasons: the tree often stands alone in the forest and is so rare that a real market for its wood never developed. Second, it is often sold together with its relatives, sorbus tominalis (Elsbeere, chequer tree, sevice tree), sorbus aria (Mehlbeere, whitebeam) or even with pyrus communis (Birnbaum, pear tree) together as „Swiss pear tree“, even though their bark and leaves are quite different. (S. torminalis is also a wonderful tonewood, which I hope to present here at another time.)
Currently, the climate crisis and a generally heightened awareness about environment and nature, as well as the latest research about trees and forests has led to a parameter change in forestry in which sorbus domestica is again appreciated as a jewel of the forest. However, its reproduction and dissemination is difficult and in human controlled forests rarely happens without human intervention. Fortunately, more and more help is being given, and in the forest where I live, I know of three young sorb trees within a 500 m radius, and I assume there are more. Here is one of them flowering last week: 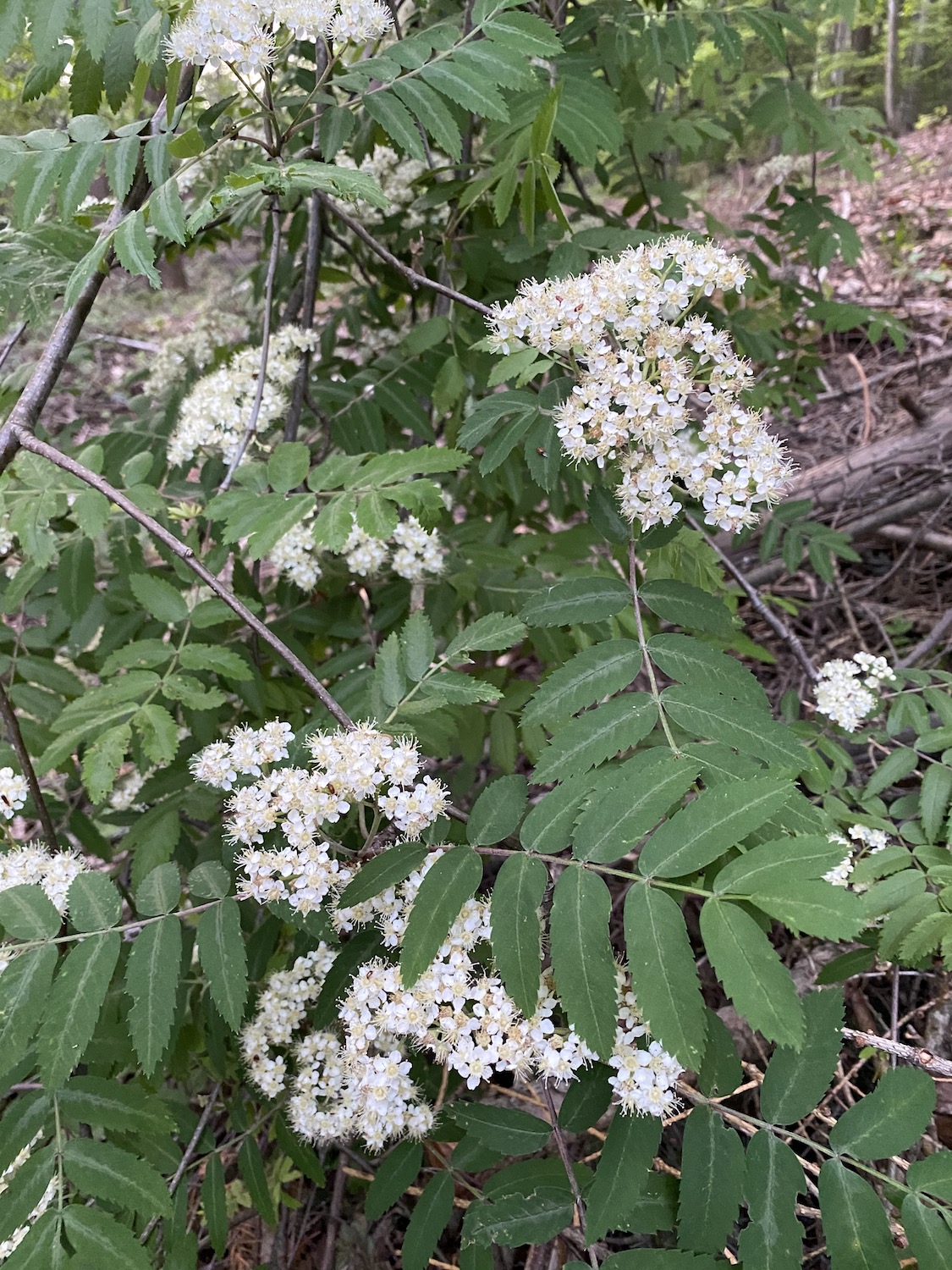 Old large sorb trees are sometimes shown in maps, and some even make it to a certain celebrity status. One of those was the huge sorb tree near Ölbronn in south-west Germany, pictured on the cover of this book: 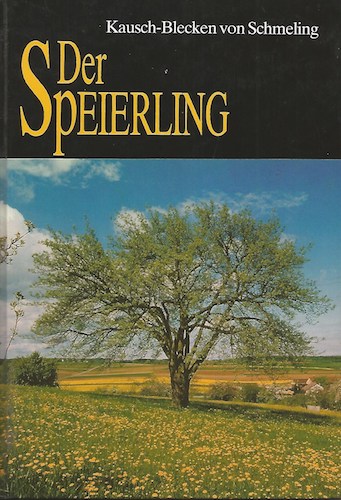 I happened to buy a car near there and decided to pay it a visit. The first person I saw in the streets of Ölbronn pointed me to the tree just outside the village. But all I found was an enormous (more than 4 meter circumference) stump, looking as if the tree had fallen in a thunderstorm. A bit disappointed, I drove away, wondering what had become of its wood.
Some years ago, I found the most beautiful sorb tree wood imaginable, coming from one of the largest sorb trees ever grown in central Europe. I was lucky to buy a large portion of that tree, some of which I have used in several guitars, as in this one:

On this website, recordings and pictures of this or similar guitars I made with sorb tree can be found. The fact that the highest price ever paid for one of my instruments (up to the time of writing) was for a guitar with back and sides of sorb tree may be taken as a reconfirmation of the tonal qualities of this wood.
I am also using sorb tree wood for most bridges of both my guitars and my ouds, for the bindings of many of my guitars and it is my first choice to turn oud pegs from.

The carpenter-wood merchant I bought all my sorb tree from is specialised in rare local woods, and one of the most ardent in propagating and planting such trees. Once, en passant, I asked him, if he knew what had become of the Ölbronn sorb tree‘s wood. He gave me a mischievous smile and said „that‘s here with me“. I managed to talk him out of a portion he had left. You have to know that trunks from trees, which die a natural death from old age, usually have no commercial value, because their wood tends to be infested by fungus. So this was only wood from the branches, albeit branches as thick as many tree trunks. Now, when I fit an oud with pegs I turned from this wood, I like to look at the picture of this magnificent tree, under which 12 generations of humans had taken shelter from sun and rain, and then my mind goes silent in awe.

This short text is meant to be nothing more than a teaser, hoping to tickle the reader‘s interest in sorbus domestica. The book with the sorb tree of Ölbronn on the cover (Kausch-Blecken von Schmeling, Bovenden 1992, ISBN 3-88452-921-8) went out of print, but fortunately, it is available for free in the internet. Unfortunately for some, though, it is in German, but I am sure, plenty of information can be found in some other languages, too.
To obtain sorb tree and related woods, or young trees for planting, please contact Thomas Kellner at info@urholz.de .

Something I wanted to do for more than 30 years was to try my hand at the very old art of gilding with genuine gold leafs. 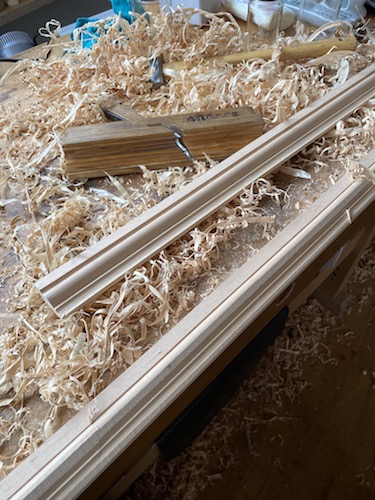 The opportunity presented itself when I decided to frame a large new mirror for my wife. The first step was to make the profiles with an old profile plane I once obtained at a flee market. It is hard work, especially when a harder wood like ash is used, rather than poplar or spruce, but the aesthetics is very different from profiles routed with a machine. 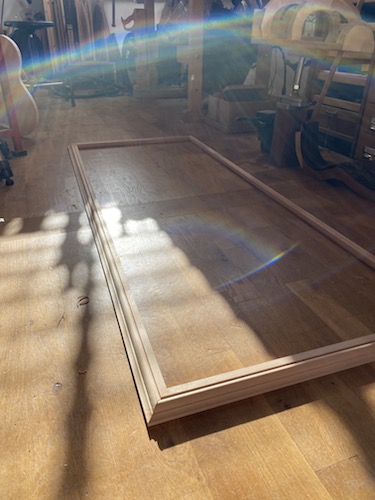 To ensure that the frame remains stable for hundreds of years, I cut the ash so that with ageing, the profiles will tend to press inwards towards the mirror.
Glueing up the frame concluded the first step of this project.

About a Tree
From a Guitar Maker’s Notes
by
Sebastian Stenzel, December 2017

If my eight years of Latin in school were worth anything, this means:


In the forest I was alive, (now) I am felled by the brutal axe. While I lived, I was silent— dead, I am singing sweetly.


I have tried to find the origin of this beautiful proverb. According to one source, it was “the oldest Tieffenbrucker”, a luthier, who first inscribed it into one of his lutes. That would most likely be Michael Tieffenbrucker, born in 1485 in Rosshaupten, Germany, a village on the northern fringe of the Alps, not far from the world famous Neuschwanstein castle, which would be built a few centuries later.


Rosshaupten and its neighboring town Füssen became the nucleus, as it were, of Renaissance luthiery. Why did the luthiers of this area prosper more than their competitors from other places, even though the political situation at that time and place was anything but supportive? Maybe they had some other advantage than being on one of the main trade routes over the Alps, and maybe the other advantage was “backyard” access to the very best spruce of all.


My first three spruce trees stood east of the Rosshaupten/Füssen area, the fourth came from a bit farther to the west: the most western part of Austria, Vorarlberg. This is also where I have now cut my fifth, and probably last, spruce tree.

PICTURES!
A master grade European spruce guitar soundboard currently sells for about 170 USD. Having resawn most of the soundboards for the 213 guitars I have made up to now myself, I feel qualified to say this price is nothing but fair. It has been difficult to obtain high quality tonewood at all times, and, owing to common forestry policy of the last 200 years, there now are not many suitable trees left. Out of fairness, the largest supplier of tonewood in Switzerland limits master grade soundboards to two sets per buyer per year. The same supplier told me this summer that he has to drive farther every year to source suitable trunks.

Nowadays, most of the best trees are sold at blind auctions, but the really exceptional ones like this one rarely make it even to this – from the buyer’s viewpoint – meanest of all sales methods.

Why is it so difficult to find a spruce tree suitable for making guitar soundboards? First, the size: anything with a diameter of less than 70 cm/27.5” is just too small. Then it has to come from higher altitudes, because only there do the trees grow slowly enough and yield wood which is light but stiff. If you went to the Alps and looked for trees fulfilling just these two most basic preconditions, you could probably scout the mountain slopes for weeks on end without finding a single one. I owe it to personal connections built up over 25 years that I was first guided to search in some promising places and then had the privilege to find, buy, and fell such a tree. How rare they are becomes clear if you add other requirements to the check list: the tree should stand on a northern slope on soil with a steady water supply, with not too much exposure to strong wind or uneven snow loads. It should be straight, round, without twist, with even annual rings, without compression wood, branches or resin pockets. Such specimens are usually 200 years or older. Just to get the scope: 1776—the Declaration of Independence of the USA. 1789—the French revolution. In between, 1784, the year this spruce tree started to grow. It IS awe-inspiring.

But I had ambivalent feelings about cutting something which to me is a sentient being. But (call me crazy - I am!) when I came to cut it and asked its forgiveness, to my surprise it answered me with a wave of joy, as if saying it was happy to come to me. For a life in music, singing sweetly.

Three years from now, I plan to make the first guitars and ouds from this tree. Although technically perfectly dry after a year, it will still be relatively fresh. But from my experience, storage time is the one parameter most overestimated and lied about, and it certainly matters much less than density, stiffness and internal damping. That, plus I just won’t be able to wait any longer!
2021
2020
2019
2018
2017